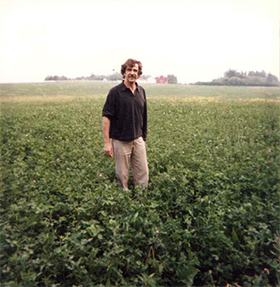 Mr. Eugen Hauser, based in Montreal, Quebec, was a pioneer in organics in the late 1970's After a successful career as a public servant for the Canadian Government, Mr. Hauser felt he could impact society more effectively through private enterprise. He re-established contacts with associates in his native Germany and began trading North American grown, organic crops to them. In turn he also began to import organic items grown in Europe and elsewhere and offering them to his partners here. He had a passion for sustainable farming and spent much time travelling from farm to farm to understand the cultivation, harvesting and processing. He also wanted to ensure a stable, quality supply of organic commodities for his customers.

After a few years, Mr. Hauser saw that although his commodities business was doing well, consumer availability of affordable organic products was still limited. With this reality, the idea of the "Inari" brand was born. Response to the brand’s offering was very encouraging and within one year, Inari had secured significant shelf space at major retailers across Quebec and was quickly becoming a trusted household name.

During the early stages of the Inari launch, Mr. Hauser was diagnosed with an aggressive form of abdominal cancer, which eventually took his life. The business continued to grow, thanks to the involvement of his son and other key staff he had put in place. Today, our selection of products has grown immensely and the Inari brand is sold across Canada in health food stores and supermarkets throughout Quebec.

Ask for the "Inari" brand in any fine health food or grocery store and feel good about continuing a family tradition to promote sustainable organic farming and a healthier planet.